Divorce, New York and Love Letter to Aretha and Monk!

Getting ready for a Divorce Party
The world will be getting a new country!!! On Saturday, July 9, The Republic of South Sudan will be officially the 193rd country and 54th country in Africa. I found this incredible photo of a Sudanese playing a trumpet, getting ready for a divorce party parade. Lorna, my wife, who had the fortune to visit South Sudan in 1998 to work for Doctors Without Borders during a terrible famine said that the rejoicing will be tempered because last month, 100,000 people had to flee their homes due to new violence. Read more: http://bit.ly/qD25eq 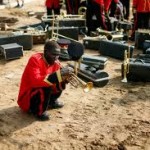 NEW YORK, Empire State of Mind with
Jeff Tain Watts, James Genus, Antonio Hart, Rashawn Ross
This is it! So psyched about reuniting with my rhythm section “Tain” and Genus to play Positootly! at the JAZZ STANDARD, Wed July 27 – 2 sets. And, can’t wait to hear Antonio Hart’s chops esp. since he’ll be coming back from some karate camp in China (!!!) and Rashawn Ross who will be in between gigs with Dave Matthews. One Night Only so help me spread the word and get your tix early.

Aretha Franklin and Monk – An unlikely pair?
Fitting in my Artistic Director duties for the upcoming Monk Institute’s 25th Anniversary Gala Event Sept 12 @ the Kennedy Center. Aretha is being featured, so I did this 7-song medley that I really grooved on. Thanks FaceBook friends for your suggested songs. The Monk medley put me in another familiar and unfamiliar world. Thelonious, YOU modernist genius!

Jazz Inside magazine – July 2011 issue – Interview about me playing with Freddie Hubbard and Miles Davis – www.johnbeasleymusic.com

Here’s the listing of my current projects and upcoming gigs. Hope to see you at a gig! 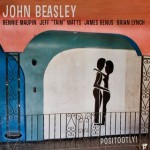 Thanks for supporting LIVE music!