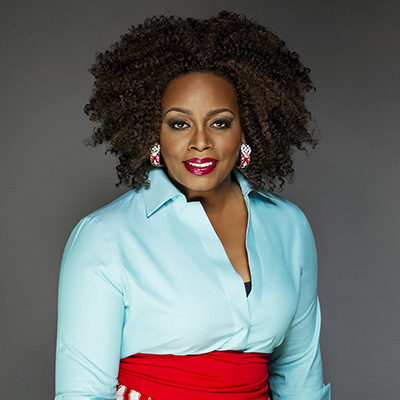 “The most admired jazz diva since the heyday of Sarah Vaughan, Ella Fitzgerald and Billie Holiday.”

Description:
The pre-eminent jazz vocalist in the world today, Dianne Reeves’ arsenal of talents is richly on display in every song of her limitless repertoire. With Dianne Reeves & Beleza Brazil, Dianne launches a new program devoted to the sounds of Brazil. In Portuguese, the phrase “Beleza Brazil” loosely translates to “the beauty of Brazil,” a sentiment brought to the fore in this exquisite program. Brazilian music has always been a passion of Dianne’s, which is evident in just about every one of her recordings. Featuring a masterful band (John Beasley-Keyboards, Romero Lubamo- Guitars, Itaiguaro Brandao-Basses, Rafael Barata-Drums), this is Dianne’s first program devoted entirely to the beautiful music of Brazil.

With her prowess, it’s no surprise that Dianne has received five Grammy Awards for Best Jazz Vocal Album, an honorary doctorate of music from Juilliard, and was recently named a 2018 National Endowment of the Arts Jazz Master – the highest honor the United States bestows on jazz artists. Dianne’s magical, timeless voice, exceptional personality and the sheer force of her performance mark her as a captivating world-class artist. Wynton Marsalis exclaims, “She has one of the most powerful, purposeful, and accurate voices of this or any time.” Beleza Brazil is an enchanting global experience from a natural wonder not to be missed.

The event is finished.